The city of Mykonos (or other names: Chora) is a tourist attraction in itself. The maze of streets (and this is not a metaphor, they are supposed to protect the population from pirates) amaze with their white and beautiful, narrow cobbled streets.
The city is faithful to the traditions of Cycladic architecture and carefully preserves them, despite the rapid development of tourist infrastructure.
Expensive fishing boats and yachts look organic in the harbor, creating a harmonious and unique ensemble.

The city’s main shopping street is called Matoyanni, where you can shop in fashion stores and find souvenirs for every taste and wallet: handcrafted rugs, jewellery, hand-embroidered clothing based on local motifs and much more.

In the capital, the must-sees:

In total, in small Mykonos, according to islanders, there are 365 churches, there are several large active monasteries.

Church of the Mother of God Paraportiani- the most famous temple on the island, which is also its symbol. The white hermit building, built in the 13th century at the exit of the ancient fortress, amazes with its architecture and serenity. This church is located next to the port of Hora, in the Castro area.

Monastery of the Virgin Mary- a very beautiful monastery, its marble tower visible from afar, inside you can see ancient Byzantine icons. The monastery is also located in the capital of the island.

Monastery of Panagia Tourliani- an ancient monastery located in the center of Mykonos near the village of Ano Mera. It is distinguished by the extraordinary beauty of the interior decoration, for example, the carved iconostasis was created by the Florentines in 1775. 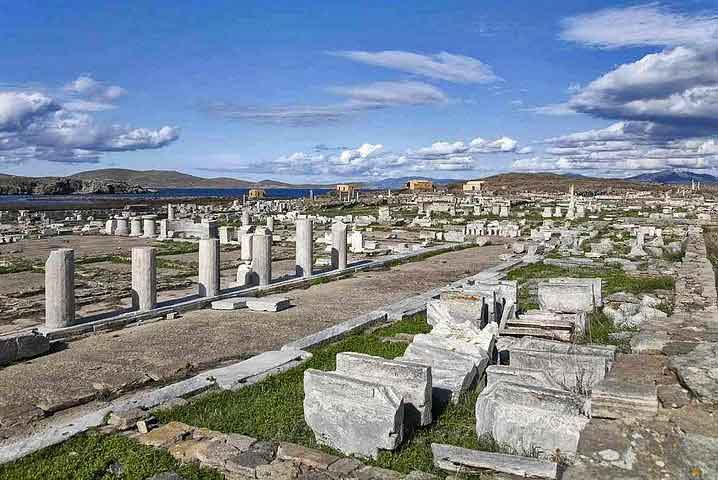 Not far from Mykonos is the uninhabited island of Delos, which at one time played a decisive role in the development of all the islands of the Cyclades and was its center.

Delos is a museum island. Traces of the Aegean civilization have been preserved here; most of the island is occupied by the ruins of an ancient city and a well-preserved amphitheater.

Delos is considered the birthplace of Apollo and Artemis, which is now protected by UNESCO.

There are several ways to get to this open-air museum:

With sightseeing… Tours to Delos are sold in almost every hotel, costing around 40 euros. There is no Russian speaking guide. The excursion will last 5-6 hours.

By water taxi from Mykonos beach to Delos beach. It costs 25-30 euros.

On the ferry ferry… Every day, every hour, the boat leaves for Delos, the ticket costs 15 euros. Plus 5 euros – the cost of entering the Temple of Apollo, if you go without a tour. The last ferry returns at 15.00.

What and How Much Do They Eat on The Island?

The abundance of a wide variety of fresh fish and seafood, as well as vegetables and fruits, always gives Greeks the opportunity to serve up interesting and delicious dishes.
Lunch in Greece usually starts with a light appetizer, followed by a meat or fish dish with a salad, and finally dessert.
There are mainly local varieties on the wine menu. Mykonos is no exception.

Prices in taverns on the island can be called moderate:

Once in Mykonos, be sure to try a local dish: Mykonos-style dry pork, prepared here according to an old recipe, draining the back of the sirloin with spices. Mykonos sausage is also prepared according to a similar recipe.
Local cheese – fried goat “saganaki” and goat or lamb with pepper – “kopanisti” – made by hand and only in Cyclades.
Mushrooms stuffed with vegetables and feta cheese at a local tavern deserve attention.

A delicious dinner for two with wine will cost you 50-55 euros here, but you can keep it at 35 if you don’t order seafood, which is more expensive here than meat, as, indeed, everywhere in Greece .

After 12 p.m., the parties in the capital gained momentum and continued into the morning. Many gay clubs are concentrated in the square near the taxi stop: Ramrod, Argo Bar, Pierros Cafe, Babylon, Coffee Cat. Here you can watch lively drag shows with quality costumes and attractive appearances.

The nightlife bar tries to keep up with the club, inviting famous DJs and Hollywood celebrities.
Some are very popular. Right on Paradise Beach is the Cavo Paradiso club, which is one of the 10 most popular discos in the world. The club is located on the edge of a cliff in the open air. It hosts some of the most popular techno parties with stunning night ocean views.

Club Remezzo deserves the title of an elite institution, where celebrities and VIPs often come to spend their time in disguise.
One of the biggest is the nightclub Space Mykonos Xperience, which focuses less on the environment but on attracting popular DJs and top dancers. For this reason, there are almost never empty seats – young people dance tirelessly until the morning.

Prices at this place are above average. Drinks and cocktails are expensive – Long Island, Mojito and others – from 11 to 18-22 euros, but it can be noted that they are made of high quality, not sparing of the alcoholic component, 100 grams.

Constant competition forces nightclubs to turn on their lights every night, coming up with more and more new ways to attract visitors.

Sunset at Fanari Lighthouse. The lighthouse stands on a rock and offers beautiful sea views from here. This magical place is located 6 km from Mykonos. It can only be reached by taxi or rental car.

Kedai Fokos- an authentic and somewhat hermit place on the bay of the same name on a wild beach. Here you’ll find fish you’ve just caught, and seasoned tourists compliment the traditional island dishes (for example, Mykonos ham) that the tavern chefs bring out. Dinner with wine will cost about 80 euros for two.

Horse tours along the island’s most beautiful spots and deserted beaches. Cost – from 65 euros per person.